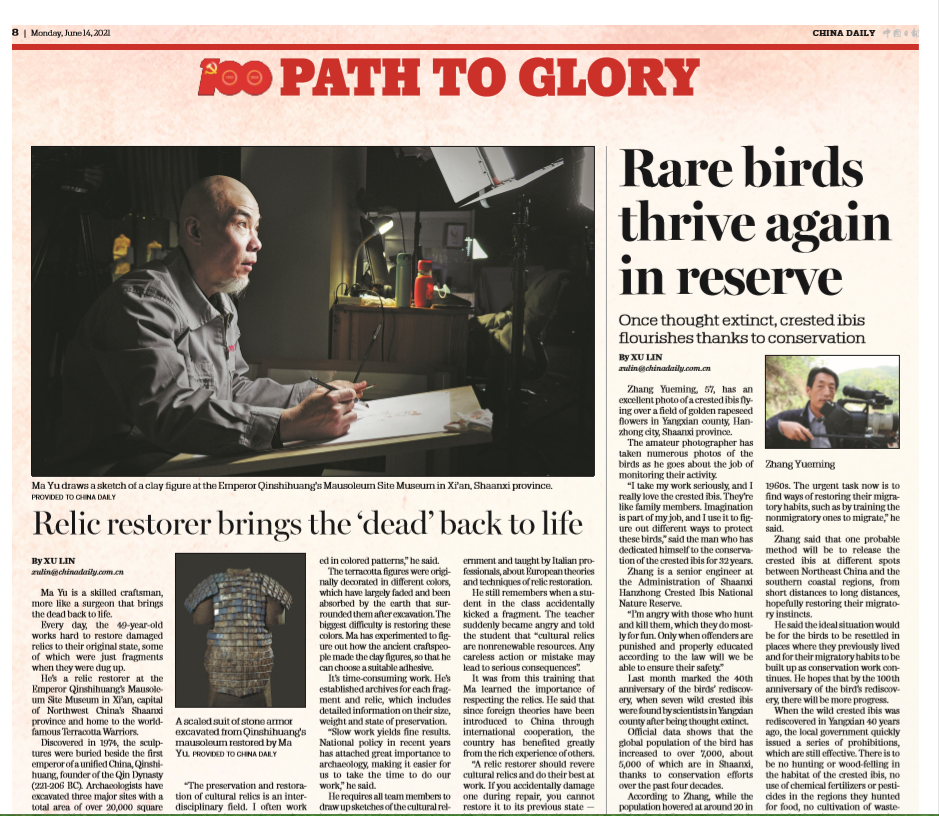 Rare birds thrive again in reserve
Once thought extinct, crested ibis flourishes thanks to conservation By XU LIN xulin@chinadaily.com.cn
Zhang Yueming, 57, has an excellent photo of a crested ibis flying over a field of golden rapeseed flowers in Yangxian county, Hanzhong city, Shaanxi province. The amateur photographer has taken numerous photos of the birds as he goes about the job of monitoring their activity. “I take my work seriously, and I really love the crested ibis. They’re like family members. Imagination is part of my job, and I use it to figure out different ways to protect these birds,” said the man who has dedicated himself to the conservation of the crested ibis for 32 years. Zhang is a senior engineer at the Administration of Shaanxi Hanzhong Crested Ibis National Nature Reserve. “I’m angry with those who hunt and kill them, which they do mostly for fun. Only when offenders are punished and properly educated according to the law will we be able to ensure their safety.” Last month marked the 40th anniversary of the birds’ rediscovery, when seven wild crested ibis were found by scientists in Yangxian county after being thought extinct. Official data shows that the global population of the bird has increased to over 7,000, about 5,000 of which are in Shaanxi, thanks to conservation efforts over the past four decades. According to Zhang, while the population hovered at around 20 in China for the first decade after their rediscovery, between 1990 and 2000 it grew to about 200, half of which were wild and half bred. He said that during that period, the key was to work with villagers, who promised to protect the birds and were paid to guard their nests during breeding season. Technical administration staff also began feeding the birds to improve their ability to breed and drew up a family tree for all the crested ibis. He said that since 2000, the speed with which the ibis breed has increased thanks to many of the country’s beneficial policies, which shifted the focus from protecting the birds themselves to their habitats. “The national policy of improving the environment has boosted conservation of the crested ibis greatly. For instance, enforcement is centralized in one governmental department, rather than across departments, and bird habitats are well-protected,” he said. According to Zhang, as the crested ibis are active over an extensive area, traditional conservation methods had to be improved. He said the crested ibis can now be categorized into migratory and nonmigratory birds, with the former previously breeding in places like Russia, the Korean Peninsula and Northeast China in summer, and migrating to warm regions in winter like Zhejiang and Hainan provinces. “It’s believed that the migratory crested ibis disappeared in the
1960s. The urgent task now is to find ways of restoring their migratory habits, such as by training the nonmigratory ones to migrate,” he said. Zhang said that one probable method will be to release the crested ibis at different spots between Northeast China and the southern coastal regions, from short distances to long distances, hopefully restoring their migratory instincts. He said the ideal situation would be for the birds to be resettled in places where they previously lived and for their migratory habits to be built up as conservation work continues. He hopes that by the 100th anniversary of the bird’s rediscovery, there will be more progress. When the wild crested ibis was rediscovered in Yangxian 40 years ago, the local government quickly issued a series of prohibitions, which are still effective. There is to be no hunting or wood-felling in the habitat of the crested ibis, no use of chemical fertilizers or pesticides in the regions they hunted for food, no cultivation of wasteland for farming, and no setting off fireworks where they bred or nested. “Such measures also laid the foundation for organic farming in Yangxian, which improved the environment around habitats and enhanced the income of villagers. The county is also doing its utmost to develop rural tourism,” Zhang said. The county government has striven to follow a path of mutual development, one that will protect the birds and the community economy. For example, a green paddy program introduced loaches to the fringes of the fields to provide food for the birds while bringing in revenue for the villagers. Zhang believes achieving this kind of balance is something that should be taken into consideration everywhere that is home to the birds, and that Yangxian county should be promoted as a model. He said it’s important to raise public awareness about conserving the birds and that livestreaming is an efficient way of doing this. Last year, the administration and local media co-organized a 100-day livestream about crested ibis breeding that drew 20 million hits every day. “To better protect the birds, ordinary people can begin with environmental protection to the best of their ability, such as not littering, and factory executives should deal with the Three Wastes (waste gas, waste water and waste residue) created by industrial production.”
Three crested ibis rest at a national reserve in Hanzhong, Shaanxi province. ZHANG YUEMiNG / FOR CHINA DAILY